Wolfenstein: The New Order became a sleeper hit of 2014. Developed by MachineGames, the game was fun, fast, diverse, and well-written. The studio had 3 years to develop a new story with the same characters and meddle with the gameplay. Did they succeed? Is The New Colossus really a new colossus when action games are concerned?

Back in the Fray

Blazkowicz is back in action and this time, he is going to help the American resistance take back the country. Fighting for Europe is all and well but Blazkowicz knows that without his homeland free and armed, the world stands no chance against the Nazi monster machine. But first, the one man army needs to gather the members of the American Resistance and start a new revolution. 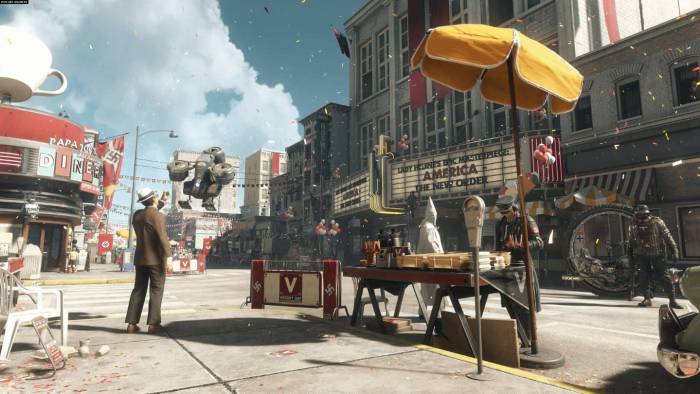 The first Wolfenstein from MachineGame has already proven that the people at the studio simply know what they are doing. Their games are just filled with atmosphere, little details, huge ideas and action-pieces as well as tons and tons of cheesy scenes, which just seem right at the moment. Never before has an alternative vision of history, in which the Reich has won the war, was presented with such pomp and romp at the same time. I am happy to report that Wolfenstein II: The New Colossus is even better in this respect.

A simple story will become great if it is filled with exceptional characters and this is just the case with Wolfenstein II. You can’t treat all the events, the huge U-boats, the flying fortresses, the Jewish miraculous inventions seriously, but you do care about Blazkowicz, his pregnant wife Anya (who, regardless of the twins in her belly, still kicks ass and tosses grenades like a pro) and the ragtag band of resistance fighters whom BJ meets along the way. They are presented so earnestly, so directly, that you have to root for them and for the broken shell of a man that Blazkowicz has become. He has known only war, he had to choose which of his friends survive, he has been in a coma, disemboweled and kicked down so many times that he stopped counting – but he always gets back into the fight. Even if the only weapon he can put into a Nazi’s skull is a fireman’s axe.

The problem with Wolfenstein II is that gameplay-wise the title is not as evolved as its themes or protagonists. It looks like MachineGames wanted to create a new BioShock, a game that explores themes of identity, struggle, and war, but needed to adhere to the formula that made the first rebooted Wolfenstein such a great action piece. The writers try to tackle many very important, present issues at once, but once the killing starts, you rarely remember about those additional elements and try to focus on not dying. 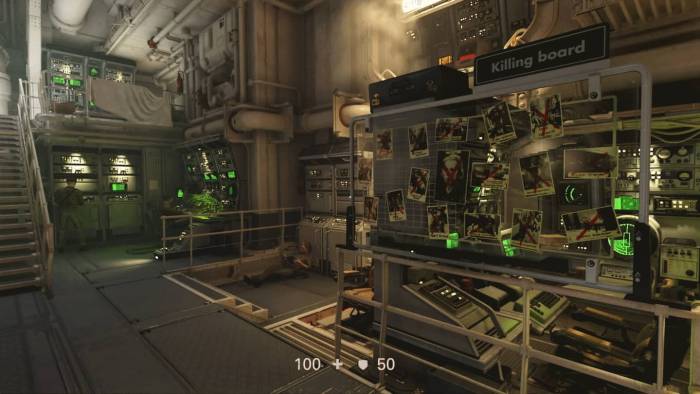 This, of course, is one of the biggest problems with popular, big budget video games. Games have evolved as a medium; its creators really want to tell stories and explore topics through their narratives, but the gameplay loop will always be present. The game, in the end, needs to be fun, or at least playable for the player to stay with it. Change the rules and you piss off the gamer. Wolfenstein II is an action FPS first and foremost, and it needs to return to its core mechanics as often as it is possible.

A Hatchet to the Head

Fortunately, it is a splendid action game that offers you even more options when it comes to killing Nazis. The arsenal of weapons that BJ has it his disposal has grown considerably. In some cases, this takes a form of an additional shotgun barrel (you can never have enough barrels, can’t you now?). But the most important new feature is the modification system. 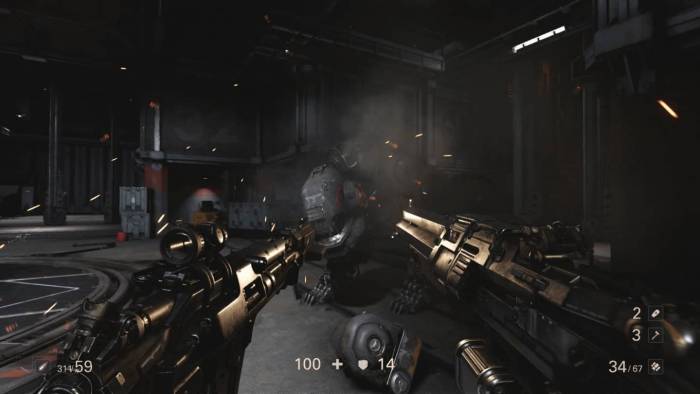 Throughout the game players will find upgrade kits that let them modify their weapons, granting access to an additional firing mode. It’s not as advanced as weapon mods in Doom, but still, it can give you a set of new options for dealing with enemies. For example, the Kampfpistole is a miniature, hand grenade launcher. Add in the “Rocket” modification and you have a pistol that shoots, well, rockets. The Dieselkraftwerk, on the other hand, spits out explosive diesel blobs, which can be detonated after a while, making it a great weapon for ambushes. But when you add in the “Ignition Muzzle” upgrade, the blobs will explode on impact.

The upgrades are great additions to the arsenal, but it is the contraptions that truly make the gameplay better. There are three special devices in the game, each of which adds in some new way to navigate its environment. For example, the Constrictor Harness lets Blazkowicz fit into really tight spaces, like vents and pipes. If you like to play silently and pick your enemies one by one, it’s a great idea to pick this contraption as the first one in the game, as the other ones will not be available for a while.

In the end Wolfenstein II: The New Colossus is the shooter you have been waiting for all year. Offering diverse strategies, depth, a great story, big levels and alternative ways to take down enemies, the game is just brimming with fun and possibilities. MachineGames has truly resurrected Blazkowicz to the world.