Rocket League is definitely a game for you if you enjoyed Supersonic Acrobatic Rocked Powered Battle Cars. Play car soccer and master the League. Get behind the wheel of a futuristic car equipped with boosters and score goals, or take advantage of advanced physics system to prevent your opponents from scoring. Realistic interaction with the ball and other cars, intuitive control and football-like gameplay will give you an unforgettable experience.

Use jump button, turbo boosts and gracefully curved walls to chase the ball in all three dimensions as you please. Learn to jump and engage turbo to fly off and somersault a ball into the goalposts from twenty meters up in the air or intercept the opposing team's offensive. Ride up the walls and guide the ball across the ceiling to become the opposing team's death from above.

Rocket League (PC) matches last for just a couple minutes, making it perfect for a brief session before going back to other things. Match-up system works fast, minimizing the time spent waiting for a chance to play with and against others. For the impatient there are several tiers of AI skill, good enough to enjoy a quick match.Make no mistake: the matches, though quick, are intense, as you tightly grab your controller to nudge the ball just right before the opponent does. 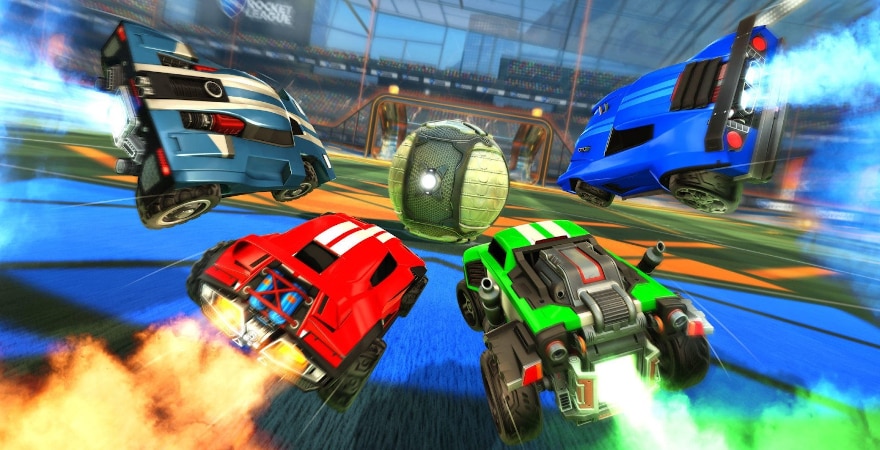 Many ways to play

Rocket League offers several game modes, and variations within them. Since release Psyonics kept coming up with new game modes and variations. Between Snow Day, a hockey-inspired mode with physics matching the setup, and a basketball-themed Hoops, football isn't the only game that Rocket League enjoys twisting in its own creative image.There is also the Rumble Mode, adding wacky, almost cartoonish pickups, from spring-loaded boxing gloves to spikes and tornadoes to shake up the gameplay for those, who seek new challenges.There are also ways to shift around the rules of regular matches thanks to "mutators" which change game factors like gravity or ball properties.Test yourself in four team sizes: 1v1, 2v2, 3v3, or 4v4 and find out which one suits you best.If playing fair isn't your cup of tea, you can always ignore the ball and focus on slamming into opposing car destroying them and forcing their respawn. Just don't abuse the option!

A lot of customization

Rocket League is the game to play if you always wanted to drive a truck with a sombrero or WW1 helmet. Unlock new accessories as you play. Pick a roof-mounted gadget, a new antenna and a new exhaust trail in addition to plenty of car bodies and tires, types and colors of paint, and decals. All unlockable as you gain experience. Don't fear balance issues, your style will never work to the detriment of your car's performance. So pick up this sombrero, load bubbles into the exhaust pipe and go play ball! 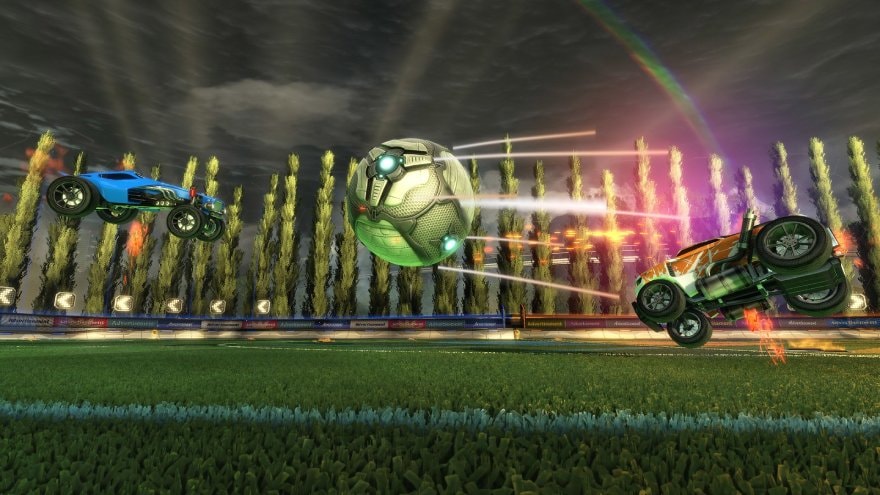 From a bright and green, almost traditional, football playing field to a post-apocalyptic sandy arena bordered by a scorched wasteland, Rocket League offers five arenas and several weather\light conditions. It was a dark and stormy night to play! Listen to the audience gasp and sigh in awe as you score goal after goal or heroically defend your own goalposts.

Your skill is the true measure of your proficiency with Rocket League. Learning to perfectly control your car is a difficult experience, but also very enjoyable and full of random moments of brilliance as you perform the perfect somersault goal or double jump and backflip the ball away from your goalposts. Match-up with players of your skill using a ranking system for online play. Before long you will perform the kind of acrobatics you saw only in Rocket League's trailers and gameplay videos, making split-second maneuvers, anticipating where the ball will be and earning victory for your team! Every goal is a story, as the game replays every successful strike for the player to bask in the glory.Rocket League is a breath of fresh air for the sport games, introducing brand new mechanics for achieving very familiar goals. Buy your copy now and join the ranks of wall-crawling, high-flying rocket-boosted cars which just want to play football so much.

Note: Rocket League (PC) for Steam is a digital product - no box delivery. The price applies to a digital version of the product. Bear in mind that after buying Rocket League as a GIFT you will not be able to add it to your inventory.
System requirements