The Elder Scrolls V: Skyrim is an action-RPG game developed by Bethesda Softworks. As the name suggests, it is the fifth game of The Elder Scrolls series. This time, players have an opportunity to visit and travel through huge Skyrim province. It is hard not to mention that the game is the winner of more than 200 Game of the Year Awards which makes it one of the most awarded games in the genre. Let yourself be sucked into the beautiful yet harsh, fantasy world of Skyrim and start one of your biggest adventures!

The action of Skyrim begins 200 years after the events presented in Oblivion. Everyone believed that dragons, huge legendary beasts that once terrorized the whole land, are long gone and the people of Skyrim can feel safe. Unfortunately, the malicious force of Alduin, god destruction in the form of a terrifying dragon, has brought those devastating beasts back to life. According to an ancient prophecy, it is the beginning of the end of the world of men. However, there is still some hope. The prophecy says about Dovahkiin (Dragonborn) – an extremely rare person with the soul of a dragon. You are the Dovahkiin – you are the last hope, not only for the people of Skyrim but for the whole of mankind. 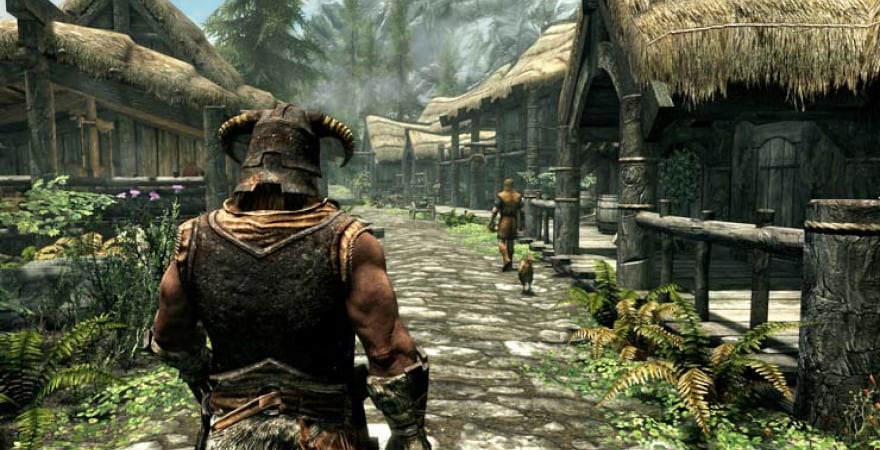 Immersive, huge world, just waiting for you to discover it, full of complex and satisfying gameplay mechanics!

TES V: Skyrim is an action-RPG game playable in both, first-person and third-person perspectives, depending on the player’s preferences. After a short introduction to the storyline and basic elements of the gameplay and creating your character, we can do whatever we want. There are ten different races that we can choose from, each of them with its individual features and traits. The developers have prepared a lot of options concerning character creation – players can tweak a vast selection of appearance features. After completing that, the player can totally ignore the main storyline and star his very own adventure.

Skyrim allows you to do whatever you want, to go wherever you want and to be whoever you want! There is no restricted class system in the game. The skills of your character will increase with your progress. The skill system has been completely re-designed. There are eighteen different skill trees in the game, each of them with unique abilities. The more you use specific kind of magic or weapon, the more powerful you become. For example, if you always wanted to play a heavily armored, unstoppable warrior, find yourself a two-handed axe and just start using it. Your capability of using the weapon will slightly increase with each hit, which will result in leveling up Two-handed Weapons skill tree. Upon leveling up, you will have a chance to increase one of three basic statistics – Mana, Stamina, or Health. As mentioned before, 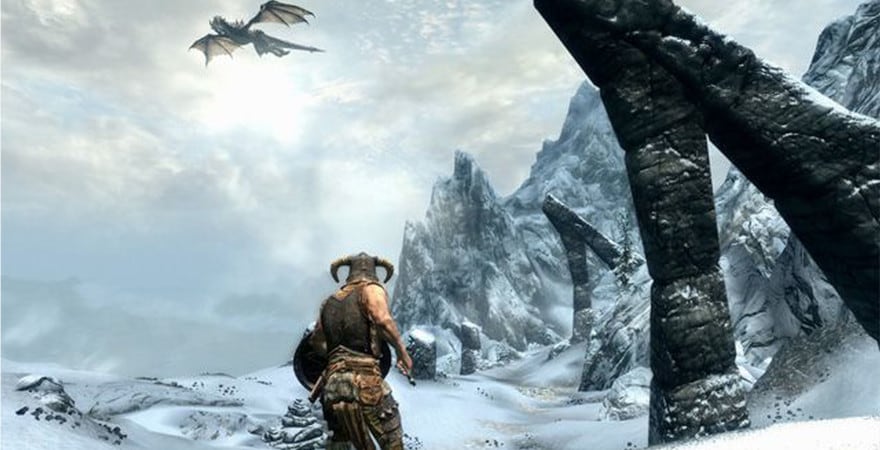 The Elder Scrolls V: Skyrim gives you total freedom – if you decide that you got bored with heavy warrior and now you would like to try a more subtle approach, just find yourself adequate equipment and start using it! If you can’t decide what kind of character you want to play, you can even become warrior/hunter/rogue/mage, etc. That is how real freedom looks like! Speaking of which – almost from the beginning of your adventure, you can go wherever you want.

Skyrim for PC gives us a huge, alive world that we can explore freely. There are five, main cities in the game, very different from one another. The game’s world is very diversified. During exploration, players will many different kinds of environments like forests, huge plains, and snowy mountains. The game has implemented a level scaling system which means that every NPC levels up with your character. Thanks to this procedure, the game will never be too hard or too easy.

The Elder Scrolls V: Skyrim is a winner of over 200 Game of the Year Awards making it one of the most awarded games in history. According to Steam service, over 97% of user reviews are positive and it reached 94/100 Metascore on the Metacritic website. Many people claim that this is an absolute ‘must-play’ not only for fans of the RPG genre but for any enthusiast of games in general. The Developers form Bethesda Studios have managed to create a game that has set the tone for many years.

The Elder Scrolls V: Skyrim key is meant to be activated on the Steam platform.
System requirements