The Old World is once again ravaged by war. Vampire Counts, Greenskins, Dwarfs, and the Empire once again clash swords, claws and choppas in Total War: Warhammer (PC). Guide your race to ultimate victory over everyone else on the continent.Total War: Warhammer is a turn-based strategy and real-time tactics game set in the Warhammer Fantasy world created by Games Workshop. Politics, economy, and the unbridled violence of warfare of the setting are yours to enjoy.

Each of the core game's four factions is a unique creation with thematic mechanics, tailored unit distribution, and strategic focus. Neither faction is anything like any other. With either Greenskin Fightiness letting them cause a WAAAAAGH!, vampiric Corruption, or dwarven Grudges. Total War: Warhammer gameplay changes drastically with each faction you pick when starting a new game. Which one will be your first choice?

Total War: Warhammer is Creative Assembly's first fantasy-themed entry into the Total War series. Based on the Warhammer Fantasy license, it merges the best parts of both franchises. Total War brings the strategic depth and political machinations, as well as a next-gen visual representation of classic units. Warhammer Fantasy refreshes the historical fiction formula with units never before seen in a Total War game. Giants, griffons, and gargantuan spiders change the nature of warfare. 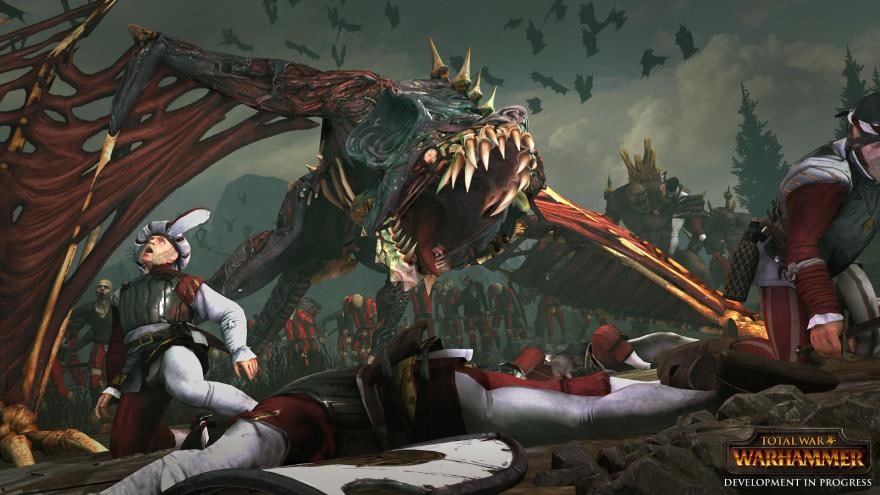 If you think you can handle some small factions just fine, stay alert. As you progress, the ominous forces of Chaos start gathering at your borders. Once they bring all of their might on you, alliances and technology matter more than anything else. Are you strong enough to combat the antithesis of order and reason when your forces are divided between protecting your other borders and locked in fruitless skirmishes with your previous opponent?

Your faction is led by some of the most legendary figures every fan on Warhammer Fantasy will be instantly familiar with. Emperor Karl Franz, Thorgrim Grudgebearer, even Heinrich Kemmler, one of the most infamous necromancers the Old World has ever known.Take part in the events shaping the continent and prove your chosen lord the supreme commander.

Lords come with dedicated quests designed to show you some of the iconic battles and provide background for the broader events of the campaign. Fight in set-piece encounters against unique enemy composition and make tactical decisions defining your approach.Is your army strong enough to conquer seemingly unsurmountable odds? The risks are great, but the rewards make it well worth the effort.

Total War: Warhammer is a match made in heaven. The depth of strategic and tactical Total War gameplay and the grand and epic scale and atmosphere of Warhammer Fantasy merge brilliantly.Pick a faction, engage in its long-running conflict, and find out whose armies are better.