Making a decent video game based on World War I is not easy. The amount of variables the developers have to consider is staggering – from the number of participating nations to the variety of big and small factors that have made the conflict the way we know it from history.

One genre that the game companies were able to use as a decent envoy of the complexity of the Great War was strategy games. Leading armies of the Triple Entente or Triple Alliance, making grave decisions during the battle – ones that could change the course of the war – was a treat for all war history buffs and fans of decent RTSs.

Let’s take a look at the best strategy games that led the player through the critical battles of the Great War.

Based on the excellent Hearts of Iron series, this mod takes the player through the darkest moments of 20th century Europe. Darkest Hour is a stand-alone mod game, based on the second installment of the Paradox Interactive series of grand strategy games. Unlike the core game, set during the time of the Second World War, DH covers the period of the Great War and the years leading to the second one. As it’s the case with other titles in the HoI series, the player can experience the game from various points of view, controlling any of the nations from the period represented in the game. 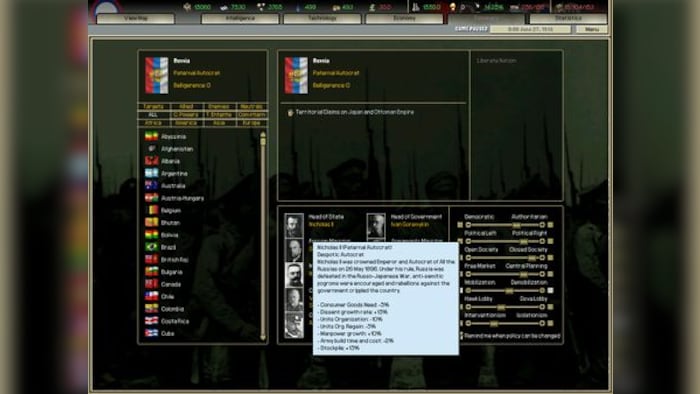 The gameplay mechanics don’t differ significantly From those in Hearts of Iron II. However, the developers have added a few new features, mainly those allowing the use of different mods with the game. The game focuses on managing the player’s country of choice through diplomacy or war. The player can choose the way they want to lead their nation, from democratic rule to authoritarian tyranny. The player can also decide on what kind of relations they want to maintain with other countries, through making alliances or declaring wars. Darkest hour was received favorably by the players, who praised the new mechanics, gameplay scenarios and support of various modifications.

Relive your childhood with Toy Soldiers – a game that combines action strategy, giving a new meaning to “playing war”. Probably most of us owned a set of plastic toy soldiers. These figurines included various types of troops, vehicles, and elements of the environment, such as barricades and hills. They were great fun to play with, reenacting historical events, movie battles, or for making up ones of our own. Now, the players can relive these fond moments from their childhood in Signal Studios’ Toy Soldiers. 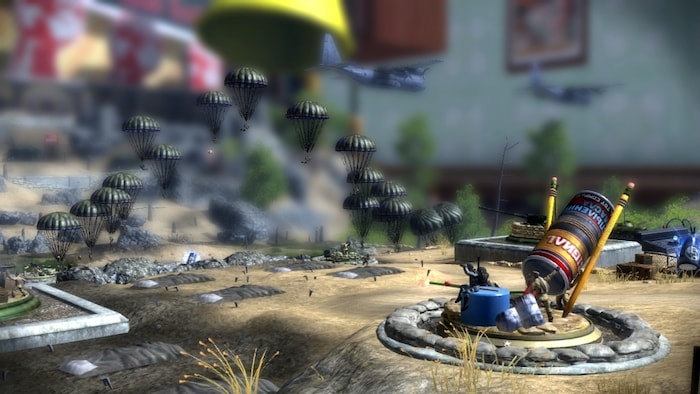 What’s unique about Toy Soldier’s gameplay is the way it allows the player to control the action on the screen. The game combines elements of action and real-time strategy – the player can move entire battalions on the battlefield or take control of a single unit from a third-person perspective. The units include soldiers, vehicles, mounted cannons, etc. Some of these units can be upgraded to deal more damage to the opposition.

The game features to modes: a single-player campaign and an online multiplayer, available only for the Xbox console. In campaign mode, the player has to defend their fortress against attacks of the enemy army. After finishing it, the player can try their luck in a survival mode, which unleashes waves of enemies they have to fend off for as long as they can. In multiplayer mode, the participants aim to destroy each other’s bases. Toy Soldiers received positive critical reception from the reviewers, who praised the unique combination of gameplay mechanics and an interesting setting.

Nival’s Enigma Engine helps elevate World War I beyond what it already is – a competent real-time strategy game with solid gameplay and decent graphics. World War I is a real-time strategy game, published by 1C Entertainment. The game runs on Enigma Engine – the same that powered the popular Blitzkrieg series of WWII-themed strategy games. Thanks to using its modified version, Dark Fox’s World War I looks as good as any game of its time and offers a unique gameplay experience as one of the few strategy titles set during the period of the Great War. 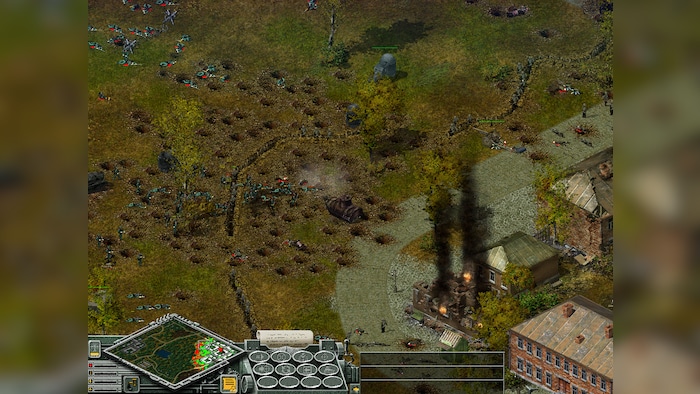 In World War I, the player takes control of one of the three sides of the conflict that engulfed a big part of early 20th century Europe. The available factions include the Entente, Russian Empire, and Germany. Each faction has its own campaign scenario, allowing the player to reach a different resolution of the historical conflict. The gameplay mechanics of World War I are similar to those of other real-time strategy titles. The player controls an army of units on a battlefield, seen from an isometric POV.

The units under the player’s control include infantry, light but not very resilient, cavalry, great for breaking enemy ranks with horseback charges, artillery and armored vehicles, heavy and powerful machines of war, and finally the aerial units, a warfare novelty. Each unit serves a particular purpose on the battlefield. It is up to the player to learn what it is and how to use it best in a given combat situation. The gameplay is demanding and requires the player to learn the ropes quickly if they want to make progress. World War I received positive opinions from the player base, who noted the games’ similarities to the Blitzkrieg series and compared it favorably to that title.

To End All Wars

“To end all wars” was a phrase often used to describe World War I for its scope and importance. To End All Wars might not be a game to end all WWI video games, but it is still a solid piece of grand strategy fun. Ageod’s To End All Wars is in a lot of ways similar to Darkest Hour, mentioned previously on our list. Both games focus on management and diplomacy mechanics, allowing the player to feel like a true leader of a nation thrown into the chaos of warfare. The game features over 1100 units, including influential faction leaders, possessing unique skills on the battlefield. 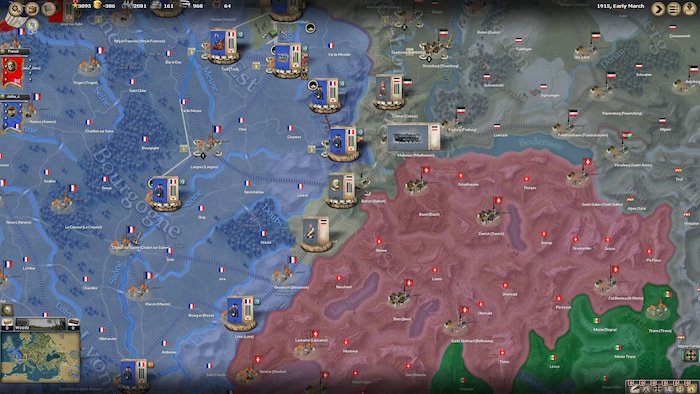 TEAW gameplay mechanics offer a large amount of variety. The key focus being managing the nation through war-torn Europe, the player will have to make decisions about forging alliances, managing the economy of their country, etc. In various situations, the player can use an implemented system of regional decision cards. They can influence different aspects of the campaign, from triggering specific events to affecting the production output of the player’s nation. Using them at the right time might be the key to victory. The game was praised by reviewers for its strategy-focused gameplay and attention to detail.

To End All Wars

Boasting complex gameplay mechanics, focusing on various aspects of running a country, Victoria II is quite possibly the most advanced grand strategy game on our list. Paradox Development Studio proves once again that they have no equal in producing excellent grand strategy games. Victoria II presents the player with witnessing European history over the course of a century. The player can live out the time when great empires were at its peak and the period of their decline at the turn of the century. The campaign includes the Great War, the most significant conflict of early 20th century Europe, that would forever reshape the continent. 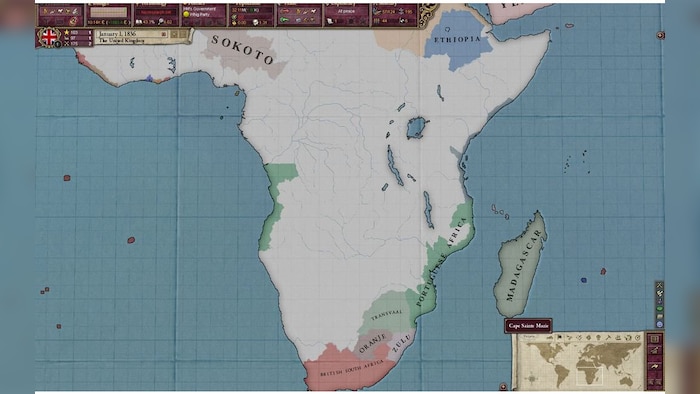 The gameplay mechanics of Victoria II are focused on three key aspects: Economy, Diplomacy, and Warfare. The economies can be developed as the player progresses through the campaign growing from cottage economies to powerful industries. Through wise decisions about production and trade of resources, the player can strengthen their position in the world. Certain goods are produced for specific purposes, such as wheat for the people and iron for industry, but can steel be used in trade.

Diplomacy mechanics encourage the player to maintain good relationships with foreign countries in order to avoid conflict. The player can achieve specific goals through political operations, and failing to meet them might result in a revolt. Reaching the level of a Great Power, a superior country on the map, grants additional diplomatic options, such as influencing the opinion of smaller nations. While not as emphasized as economy and diplomacy, warfare is also present in the game. The combat system is similar to that in Europa Universalis and Hearts of Iron series, with the player controlling large military units on the map. Victoria II received positive opinions from the critics. Reviewers praised the complex mechanics and less convoluted game interface, compared to its predecessor.

What makes the strategy games on our list stand out among others isn’t only the fact that they feature the setting of the Great War – one that is often neglected in favor of World War II. Each of these games offers the player something unique: gameplay mechanics, unusual use of the setting, etc. But, first and foremost, these games are excellent strategy titles in their own right. The players who decide to give them a chance will find out hours upon hours of fun trying to outsmart the AI or live opponents through grand battles and political and diplomatic maneuvering.