Over twenty of available machines, thousands of airports, excellent flight mechanics, and astounding graphics make MFS 2020 a must-have for the fans of flying.

Microsoft Flight simulator 2020 is a simulator video game for Xbox One, developed by Asobo Studio and published by Xbox Game Studios. The game is the fourth installment in Microsoft’s series of flight simulators. The game features 20 planes that the player can pilot, and 30 airports, located in various locations of the world.

The gameplay focuses on giving the player the most realistic experience of flying a plane by faithfully representing the flight mechanics, changing weather conditions, etc. Microsoft Flight Simulator 2020 received positive initial reviews, with critics praising the detailed gameplay mechanics, realistic world graphics, and a variety of machines available to the player.

MFS 2020, as the title suggests, aims at providing the player with the most realistic gameplay experience. The game’s mechanics feature realistic plane controls scheme, filled with a variety of indicators that the player will have to learn to manage. The core mechanics focus on flying the aircraft to its destination. To do that, the player will have to handle plenty of variables such as the plane’s condition, fuel consumption, weather forecasts, etc. Being well prepared for the flight is the pilot’s best quality, one they should practice every time they take to the air. 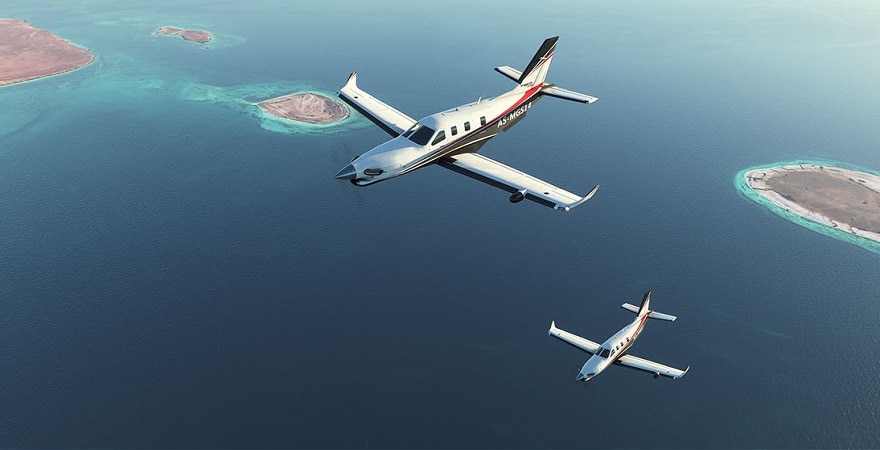 From crop duster to airliner

Flight Simulator features 20 carefully recreated aircraft. They range from small, one-engine machines to impressive airliners, capable of carrying hundreds of passengers and tons of cargo. Each plane has a different flight mechanic – small planes are fast and agile, while larger ones are less maneuverable but more resilient to changing weather conditions. On their journey through the sky, the player will have to learn to control these machines if they want to take their place among the best pilots in the world.

Different types of aircraft mean that the player will have to master different styles of flying. Learning the machine inside out will help the player in the long run as being a pilot is one of the most challenging jobs on the planet. The situation during the flight changes by the minute, and it doesn’t take much for the initially calm voyage to take a turn for the worse. A sudden storm, an equipment malfunction, or other onboard emergencies will test the player’s problem-solving skills as well as how well they do under pressure.

Microsoft Flight Simulator always boasted a wide range of locations the players could visit. The 2020 edition is no different. Throughout the gameplay, the player will travel to over thirty-seven thousand airports located around the world. The most famous of them have been painstakingly recreated, with attention paid even to the smallest detail. The US airports such as LAX, JFK International, English Heathrow or Charles De Gaulle Airport in France will please the eye of any air traffic aficionado.

Aside from the airports, the developers made sure that the entire world the player will see from the cockpit window looked as reals as possible. Using the data from Bing Maps servers, they recreated over a million cities, billions of buildings, trees, and land structures. The player will have no problem recognizing characteristic locations like the Statue of Liberty in New York, the Golden Gate Bridge in San Francisco, or the Grand Canyon in Colorado.

The initial reception of Microsoft Flight Simulator 2020 was positive. The reviewers praised the game’s graphics, attention to detail, and gameplay mechanics. The scale of the faithfully recreated world was also noted as a positive, as was the stable of available machines. All in all, MFS 2020 is expected to continue the grand traditions of Microsoft’s series of excellent flight simulators.