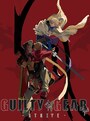 Guilty Gear Strive - Gameplay Guilty Gear Strive is a fighting video game that lets players choose their favorite character from several playable ones, and then fight against various enemies in a series of duels to the d ...