Dying Light is a first-person survival horror game developed by Techland and published by Techland Publishing. The game is set in a fictional Middle Eastern town of Harran, where an outbreak has turned the people into feral creatures. The player controls agent Kyle Crane who is sent there to investigate. The game’s mechanics focus on action, traversal and upgrading the player character.  Dying Light received positive reviews from critics.

The action of Dying Light is set in Harran, a town in the Middle East, ravaged by a mysterious outbreak, which turned the citizen into zombie-like creatures. The game features a night and day cycle, which affects the behavior and strength of the enemies – they are weaker and idle during the day and stronger/more aggressive at night. Weapons in DL can be crafted from resources and blueprints found throughout the game; firearms become available later in the game. 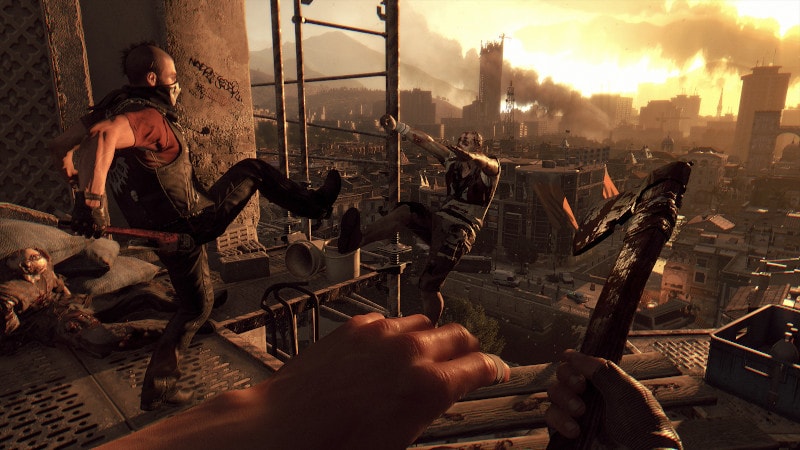 The player moves around the town on foot, employing a variety of parkour moves. They can also use a grappling hook to access elevated areas on the map. In-game actions yield different types of skill points: power, awarded for killing enemies, agility – for elaborate parkour moves, and survival, for completing missions and side quests. The points can be spent on upgrading the player’s skill tree.

Agent Kyle Crane is sent to the town of Harran, searching for a rogue politician, whose knowledge could jeopardize Crane’s employer. Upon arrival, he discovers a mysterious outbreak, which turned the people living in Harran into monsters. As the entire area has been quarantined-off, Crane can only rely on himself and whoever he can trust within the town to find out who released the virus and decide whether to focus on his task or help other survivors.

Dying Light key is meant to be activated on the Steam platform
Warning! This product does not include The Following DLC or The Season Pass
Warning! This product is region locked and CAN'T be activated and played in: Germany, Japan, Russian Federation, Armenia, Azerbaijan, Belarus, Georgia, Kazakhstan, Kyrgyzstan, Republic of Moldova, Tajikistan, Turkmenistan, Uzbekistan, Ukraine.
System requirements